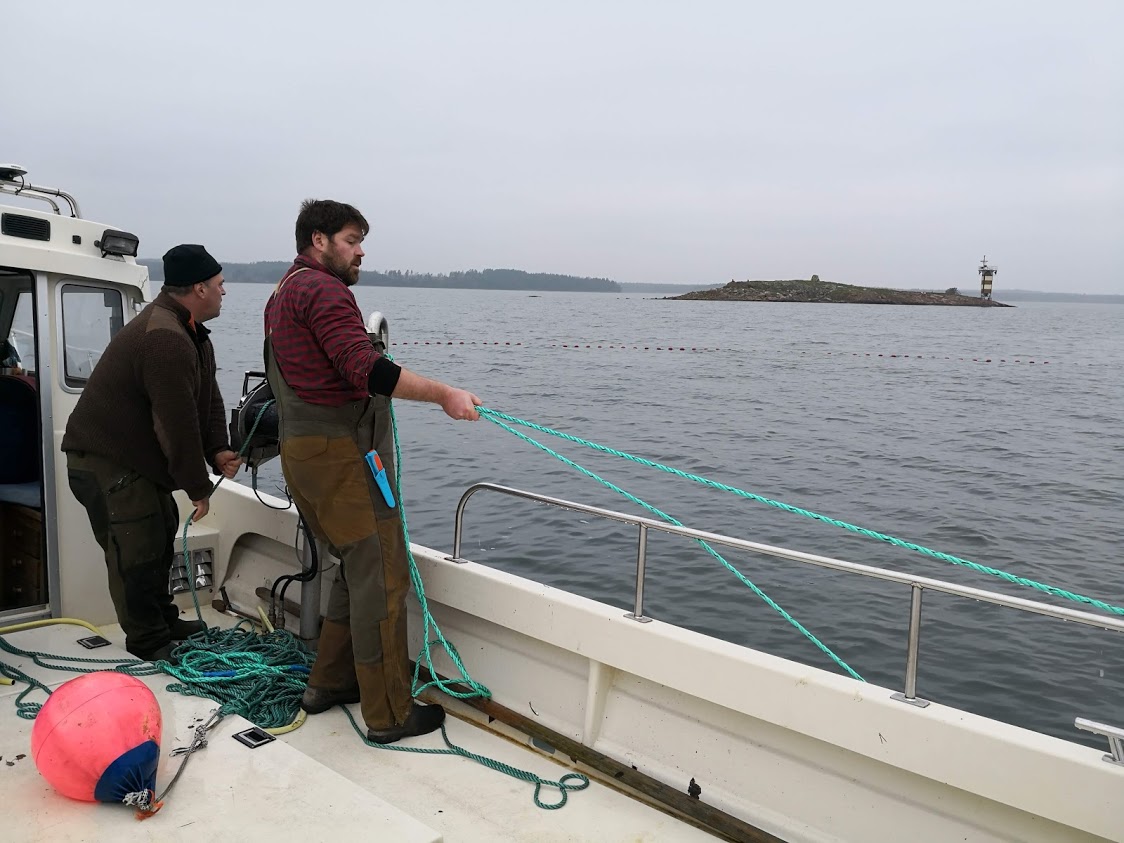 Harvesting of over dense populations stickleback

During the project,  a concept of Water Improvement Fund was developed on Åland. One of the pilot activities for testing the concept is harvesting of over dense populations stickleback, which removes nutrients from marine environment but also acts as positive biomanipulation. There is a correlation between the population of predatory fish, zooplankton and water quality. It is possible that harvesting the dense population of species that feeds with zooplankton and eggs of predatory fish, together with other activities supporting the predatory fish stocks, could  result in improvement in the marine environment. At the same time, phosphorus is taken up from the sea with the fish catch: The phosphor content in the fish is approximately 0,8%, so the total amount of removed nutrient is dependent on the catch. Fish species like the stickleback have high content of fatty acids and omega-3, which could be refined for further use into high value products. Thus, the pilot will also look into the potential for commercial utilization of these fish. Find out how the first fishing trials went and what we learned about the fishing methods and suitable gear.

The report for the stickleback harvesting can be found behind this link.

In addition to stickleback harvesting, complementary measures to increase predatory fish stocks are implemented to support ecosystem recovery of selected coastal bays. The construction of artificial reef structures and small scale wetlands, “pike factories” aim to improve the condition of coastal ecosystem in pilot bays to be more suitable for spawning and “nursery” of young generations of pike and other predatory fish which spawn in shallow sea bays. The aim of these measures is to support the positive biomanipulation activity of removing stickleback, which eat the eggs and youngsters of the predatory fish. In environmental studies, strong populations of predatory fish are shown to correlate with the better environmental status of waters. In addition, the underwater vegetation in coastal bays also binds nutrient flows coming from land, thus preventing the eutrophying nutrients entering the open sea. Read more about the environmental benefits of pike factories and our instructions on how to build them. See also the manuals for building pike factories and artificial reefs provided by the SEABASED project.

This video made by the County Administrative Board of Östergötland describes the aim of the artificial reefs.

During the development of the concept of Water Improvement Fund, it will be tested whether stickleback fishing and the “pike factories” could be included in the concept and, further, potentially used as compensatory measure in improving the state of coastal marine habitats in the future.

Results from these pilot measures were presented in the SEABASED Final Webinar on January 26th, 2021. See all of the presentations behind this link. See also the manuals for building pike factories and artificial reefs, and the report for the stickleback harvesting provided by the SEABASED project.

The County Administrative Board of Östergötland
The Environmental department, The Department of Nature protection
firstname.lastname@lansstyrelsen.se