Finding a suitable and successful method to catch a fish that has not been commercially fished for a century has been full of trials and errors. With relentless work and not giving up on the first hurdle, the SEABASED project has found a suitable method and fishing gear that should work with this tiny yet ecologically significant fish. Rosita Broström from the Åland Fish Farmers’ Association writes more about the process of trying, failing and ultimately succeeding.

Since we started the stickleback pilot project, more evidence has been put forward regarding the alarming increase of the stickleback populations in the Baltic Sea. Fish surveys done along the western Baltic Sea coast suggest a gradual spatial regime shift taking place, where the decline of perch and pike populations results in increasingly larger areas of stickleback dominance, ultimately threatening the entire ecosystem structure of the Baltic Sea, as also marine ecologist Ulf Bergström noted in a previous SEABASED blog post.

This suggests that the situation may be even more urgent than expected and that makes us even more eager to contribute to finding the solutions. Small scale coastal fishing is just a part of the solution, but given the right circumstances it could potentially make a significant difference to the local populations of perch and pike.

The trials and tribulations of stickleback fishing

Our great enthusiasm for developing a small scale fishing method has been somewhat curbed by a series of trials and tribulations during the past fishing seasons. We anticipated difficulties before the project started and it indeed turned out that trying to catch sticklebacks with a small fishing boat, a small net hauler and a small, tightly meshed seine also comes with many small problems to solve.

First of all, we knew from the start that we needed to work with the current size and outfittings of the Åland island fishing fleet, which put up a lot of restrictions on gear available for this type of fishing. The good thing about that, is that if we can get it to somewhat work during the project trials, then it is a lot easier to build on that with the correct equipment for this type of fishing, if there ever is a commercial expansion for this fishery.

In practice, the smaller the mesh of the net is, the more resistance it will create through friction as it is hauled through the water. The hauling machines used in most small scale fishing boats are not designed for hauling such heavy nets, which means that the hauling has to be assisted manually. This has put a lot of demand on us to develop an efficient hauling technique. 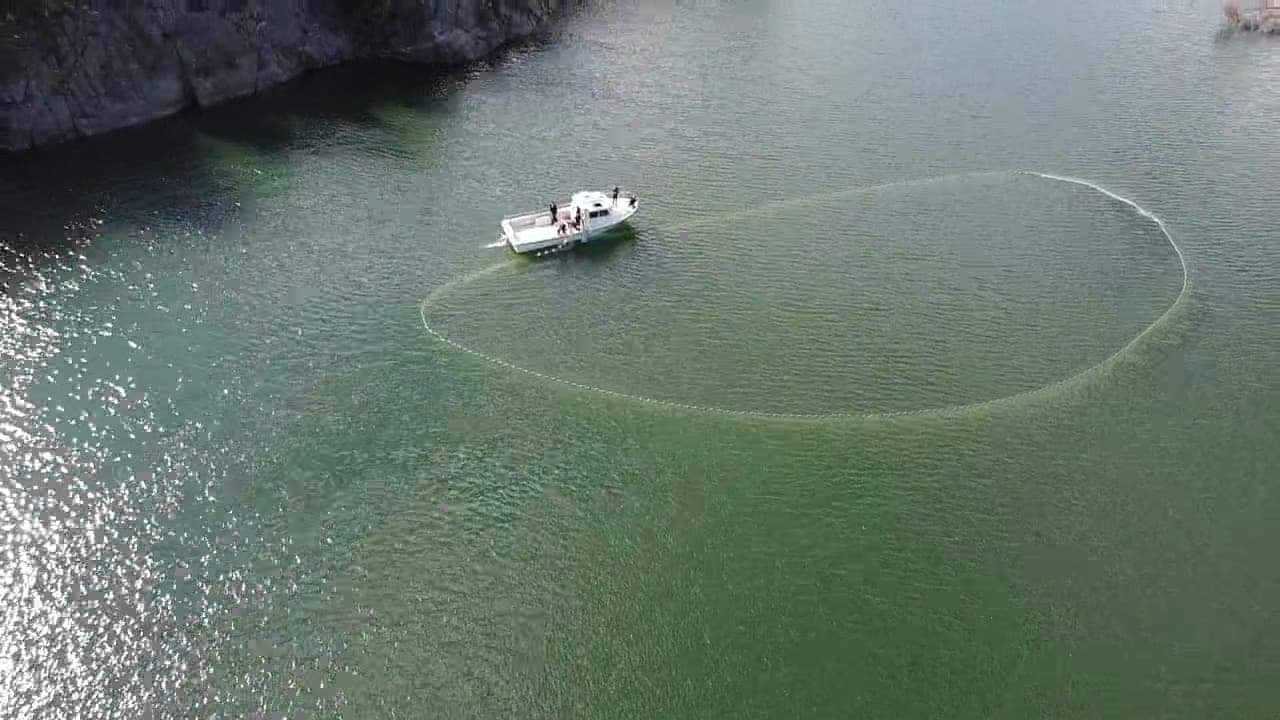 The seine is laid out in a circle and ready to be hauled. Photo: Hjalmar Mörn

During the first trials, we noticed that the slow hauling allowed the stickleback to escape downwards, before the seine was closed. This could be prevented by fishing at more shallow depths close to the shore, however in these areas we got plenty of by-catches of perch, which should be avoided if possible. Keeping in mind that sticklebacks tend to congregate in the upper parts of the water column during certain times, and when that happens, then it would be an ideal situation to carry out fishing with this method, with potential for bigger catches and minimal effect on the sensitive bottom area and a smaller risk of by-catches.

Our solution was to make a functional change to our net, adding rings and a purse line to the bottom of the seine. This way we could close the bottom first and then haul the net without being in a hurry. We also considered the option of switching the standard net hauler for a more powerful trawl drum, like the ones used with lampara nets, but soon discovered that the one available locally was too large to fit on a small fishing boat.

We had all the changes ready for the early summer, which according to all expertise, should be the best fishing period. As it happened, It was a beautiful, sunny day in May, and it seemed like we had finally worked out all the kinks and were ready to do some serious stickleback fishing. We were excited to test the newly modified seine, but just as we did the first throw, the net got stuck in an anchor that had settled with the wrong side up on the stern of the boat used, and was ripped apart! That abruptly concluded the spring fishing season and was a serious set back to the project. We managed to repair the seine during the summer but a part of one wing was too damaged to be repaired and had to be discarded. A valuable lesson learned about the importance of the right boats for the right type of gear when fishing.

Relentless efforts have led to a finalised setup that actually works

Nevertheless we continued in early autumn with a few fishing sessions, and we finally managed to get some hauling done. We had quite a lot of perch as by-catch and not much sticklebacks when fishing in the inner archipelago, but the results were still positive, because catching the fast swimming perch was an indication that we had a working solution. When switching to the outer archipelago we managed to surround larger amounts of juvenile stickleback. The biggest stickleback school we observed was a “cloud” formation approximately the size of 1 m², but when tightening the net, most of the fish slipped through the net as they were caught in the wing of the seine, which has a larger mesh size than the bunt end. We would not have been able to land them anyway, because they were all juvenile, and would have needed a really fine mesh to get caught. The mesh sizes (10 mm and 6 mm) we have anticipated being sufficient from the beginning, seems to be somewhat too large. 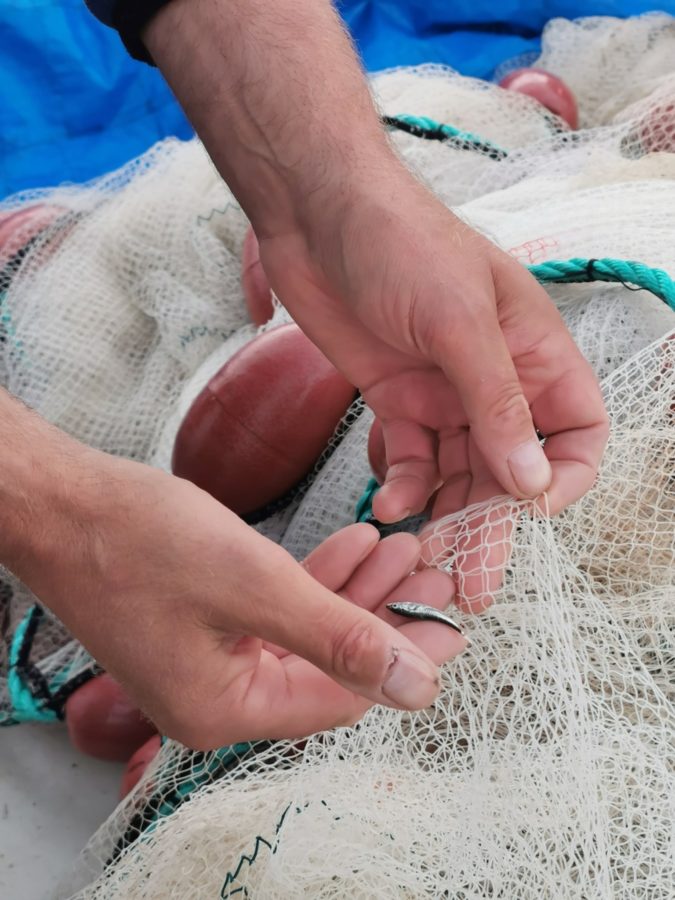 The tiny stickleback juveniles can easily escape even through the smallest mesh. Photo: Rosita Broström

On the bright side, we now have a setup that works. We can effectively haul the net and throw it again without the need to haul through and “reset”, and we have had larger schools of stickleback surrounded. The project continues, and we should be in good shape to try to find and fish for larger adult sticklebacks going forward.