As one of the measures in the SEABASED project to help control eutrophication, a pike factory, i.e., an artificial small-scale wetland suitable as a breeding area for pike, will be created in the Linköping area in Sweden. Marine biologist Miina Mäki, the Project Manager for the SEABASED project, describes how the pike factories work and why they are important.

Predatory fish, such as pike, have been shown to play an important role in aquatic food chains by regulating the populations of other species and maintaining good water quality. Predatory fish eat smaller fish that often feed on zooplankton. When the populations of small fish are kept in check, the amount of tiny aquatic animals, i.e., zooplankton, remains large enough to consume and control the levels of microscopic algae, i.e., phytoplankton. In this way, thriving populations of predatory fish control indirectly the growth of algae and reduce the visible adverse effects of eutrophication.

Successful breeding is an important prerequisite for the regeneration of a fish population and for maintaining healthy stocks of predatory fish. Pike prefer to spawn in shallow, reedy bays, flads (lagoons with little influx of seawater) and coastal flood-meadows, where the juvenile fish are well-protected during their first weeks of growth. Pike that live along seacoasts may also choose freshwater spawning sites, such as areas where watercourses flow out. The number of suitable spawning sites has decreased as a result of, e.g., coastal development and the consequences of eutrophication, such as excessive vegetation and algae growth in coastal areas. A decline in pike stocks has also been noted in some parts of both Finland and Sweden. 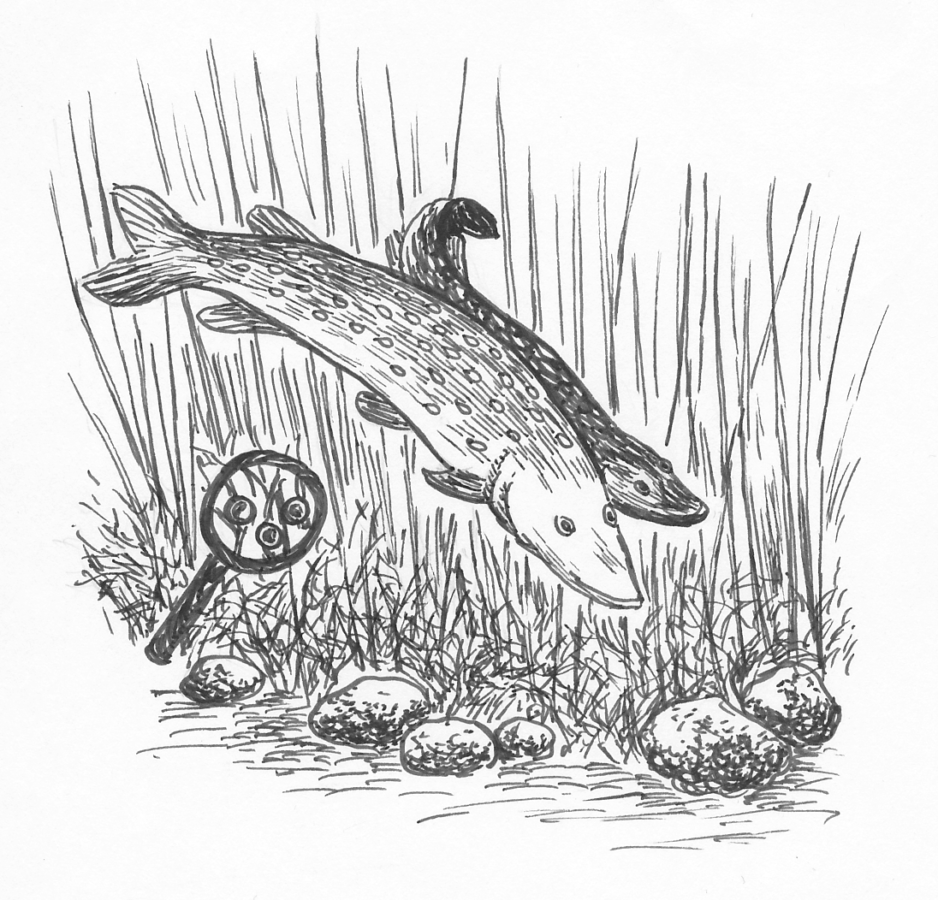 Pike spread their eggs loosely among the vegetation in the spawning area. A good spawning site may attract dozens of female pike. Illustration: Miina Mäki 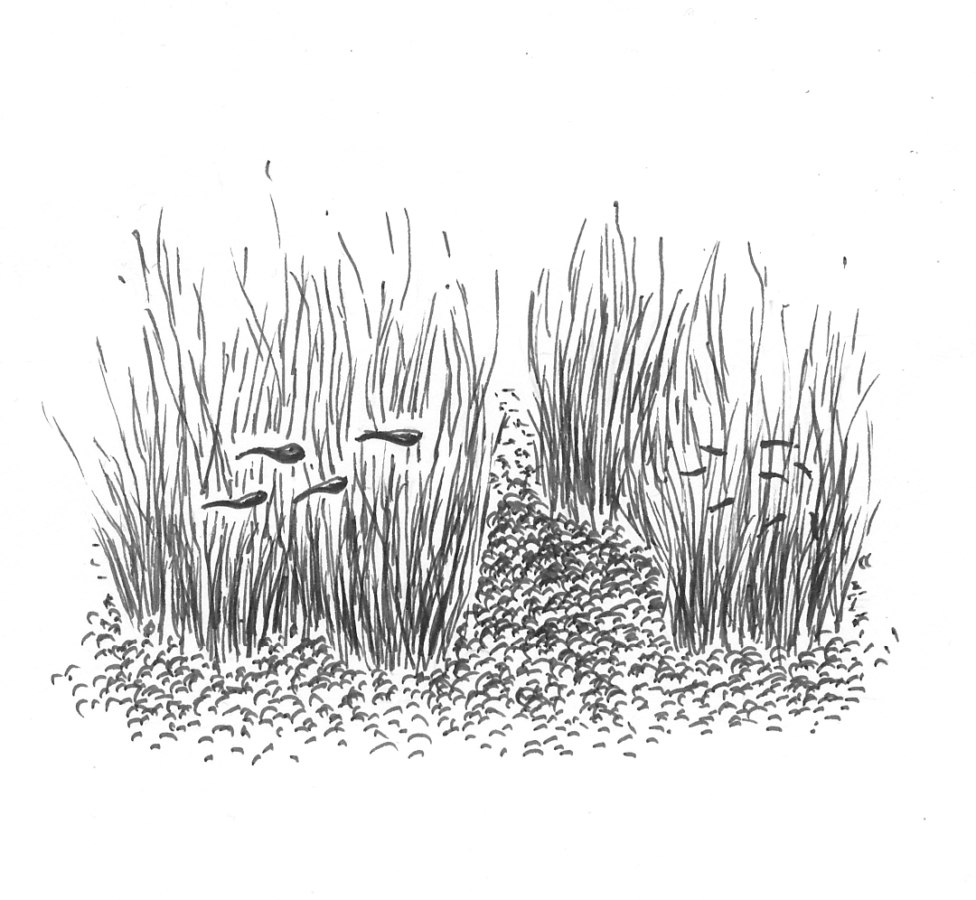 After hatching, the young pike attach to vegetation for about a week and continue to grow feeding on their own yolk sacs. Illustration: Miina Mäki 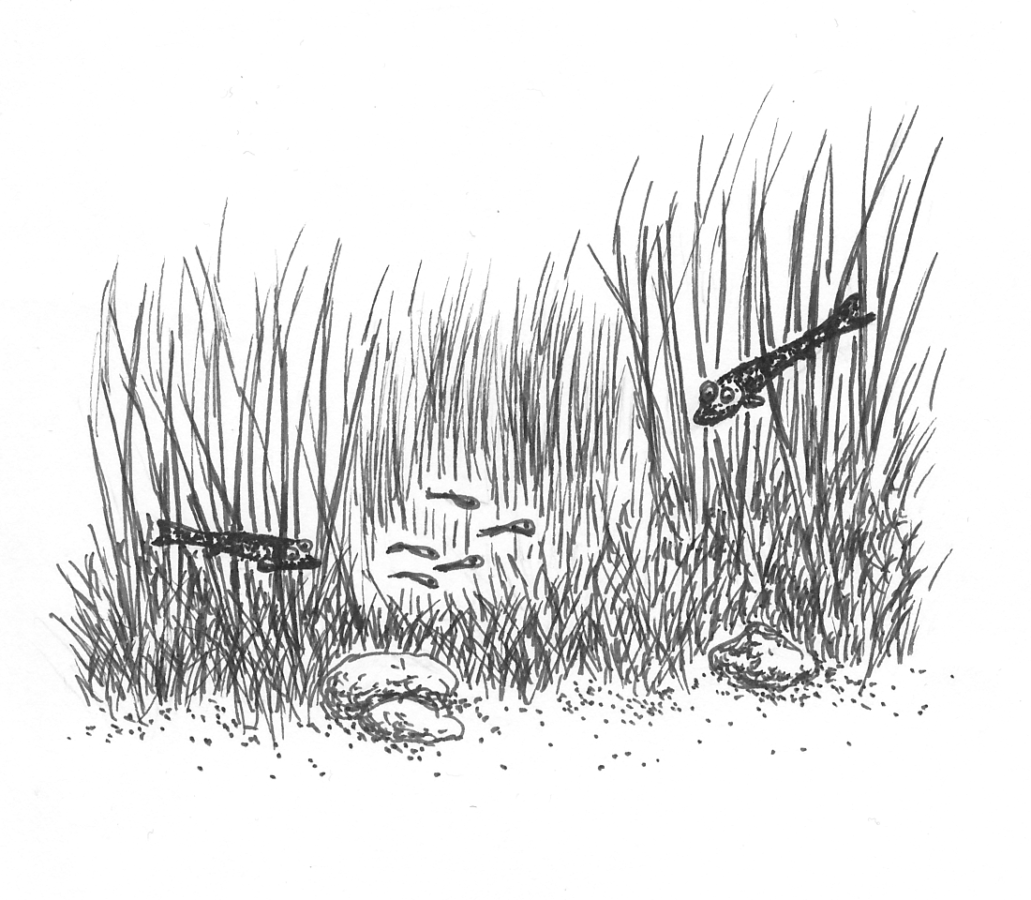 When slightly bigger, the pike fry start looking for zooplankton and smaller fry, including their own species, to eat. The spawning area must provide enough food sources for the pike fry to grow fast enough to survive outside the spawning area, as well. Illustration: Miina Mäki 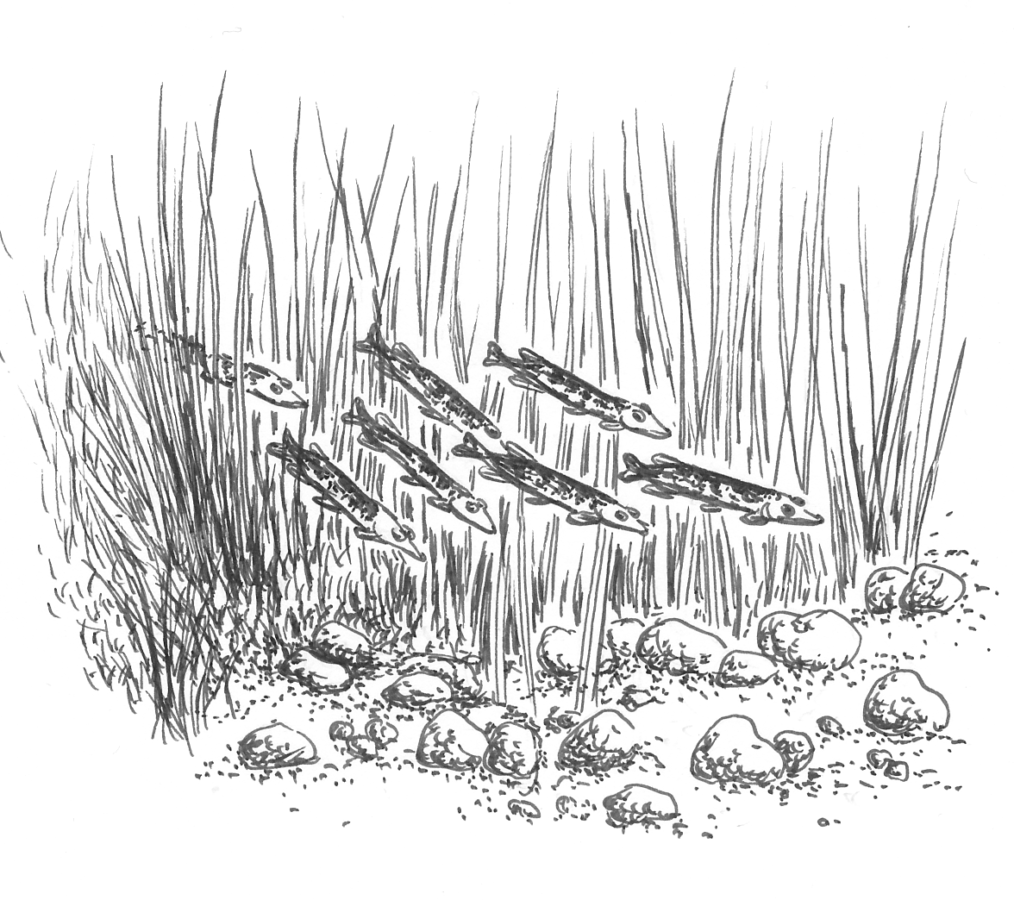 About four weeks from hatching, when slightly less than 10 cm in length, the young pike leave the sheltered area where they have grown and swim out into the sea in large numbers. Juvenile pike prey e.g. among reeds and submerged aquatic vegetation. Illustration: Miina Mäki

As one of the measures in the SEABASED project to help control eutrophication, a pike factory, i.e., an artificial small-scale wetland suitable as a breeding area for pike, will be created in the Linköping area in Sweden. The underwater vegetation in the wetland provides good conditions for pike reproduction, and the fry find more nourishment and are better sheltered from bigger predatory fish. A further measure taken in the pilot area is to harvest three-spined stickleback, which preys efficiently on pike eggs and fry in breeding areas. These measures aim at increasing the populations of predatory fish in the area to promote better water quality.

When implemented correctly, the vegetation in the wetland will also bind loose matter and nutrient flows from the land. Similar pike wetlands have been established in Sweden with good results. The preliminary results from a follow-up study funded by BalticSea2020 show that the amount of adult pike has as much as doubled in areas close to a pike wetland as compared to reference areas. In Finland, pike factories have also been created by the Finnish Federation for Recreational Fishing (Suomen Vapaa-ajankalastajien Keskusjärjestö). Read more on their website (in Finnish).

Read more about the pike factory pilot in the SEABASED project.