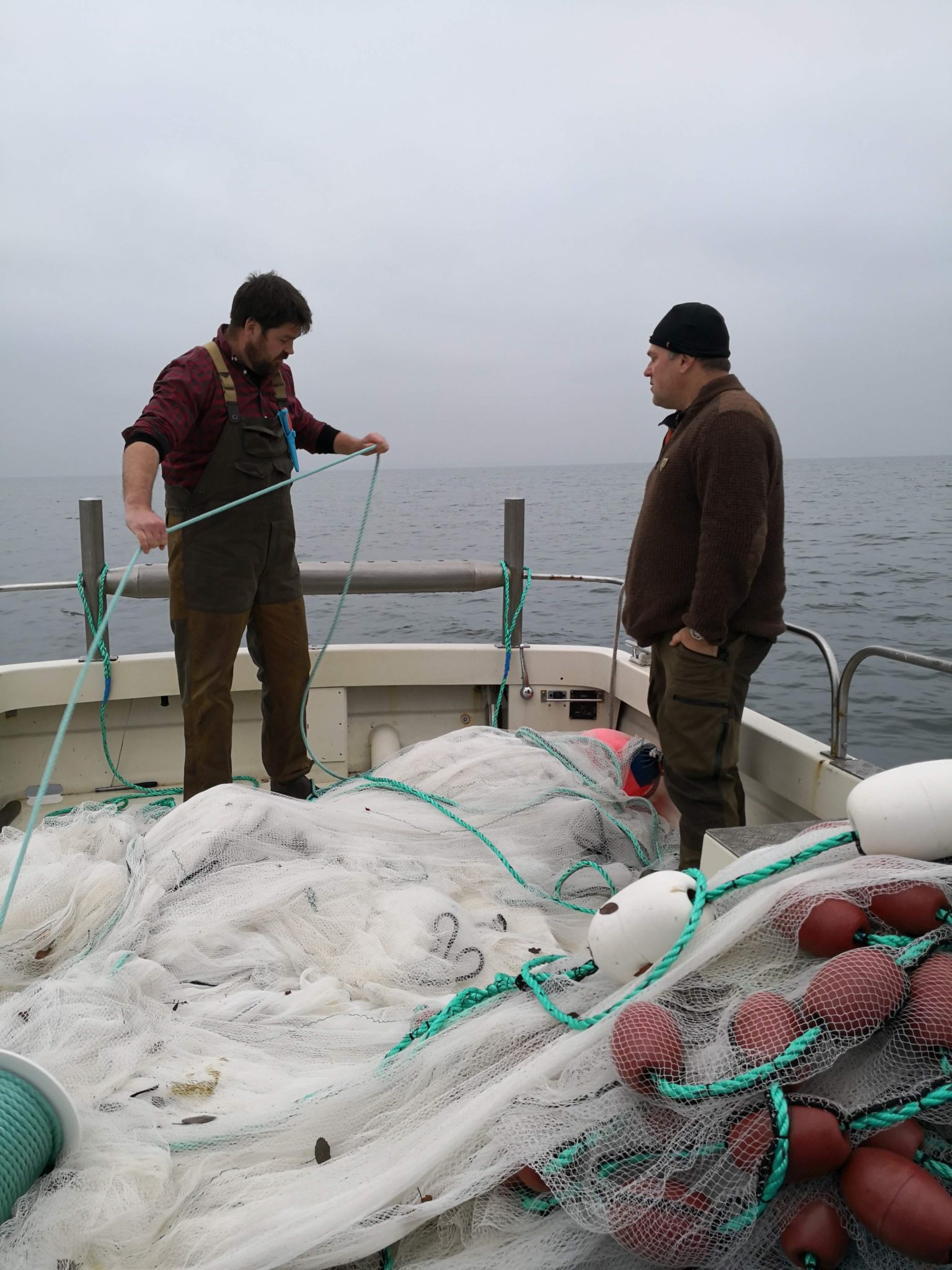 Fredrik (left) and Johan (right) getting the seine in order for a throw.

After several weeks of storm and rough sea the weather finally decided to calm down and it was a perfect day to go fishing. Fredrik picked me up early in the morning and with him he had the brand new, custom made stickleback seine, loaded on his trailer. We brought it to the harbor, where fisherman Johan was waiting for us in his boat. After loading up, we headed with full speed towards our designated fishing area in Lumparn, an inner archipelago sea on Åland. We were all very excited to test this new equipment and we had no idea what results to expect. Even though I was in the company of two experienced fishermen, we were in fact all rookies when it came to fishing stickleback!

We reached our destination and did our first throw.  Fredrik and Johan were handling the equipment and making sure it ran smoothly from the boat and into the sea. I, who am otherwise barely trusted with the rudders of my family’s small recreational boat was somehow put on steering duty on the fishing boat (!) To my great surprise we still managed to get the seine laid out in a nice, wide arc. Then it was time to start hauling the net in again so to close up the seine.

When most of the net was retrieved back on the boat, a few sticklebacks and small herrings were starting to appear, dispersed in the net. Finally, we reached the catch at end of the catching cone: about 2,5 kg mix of herring, sprat and stickleback. Nothing too impressive, but not all that bad either for a first try! 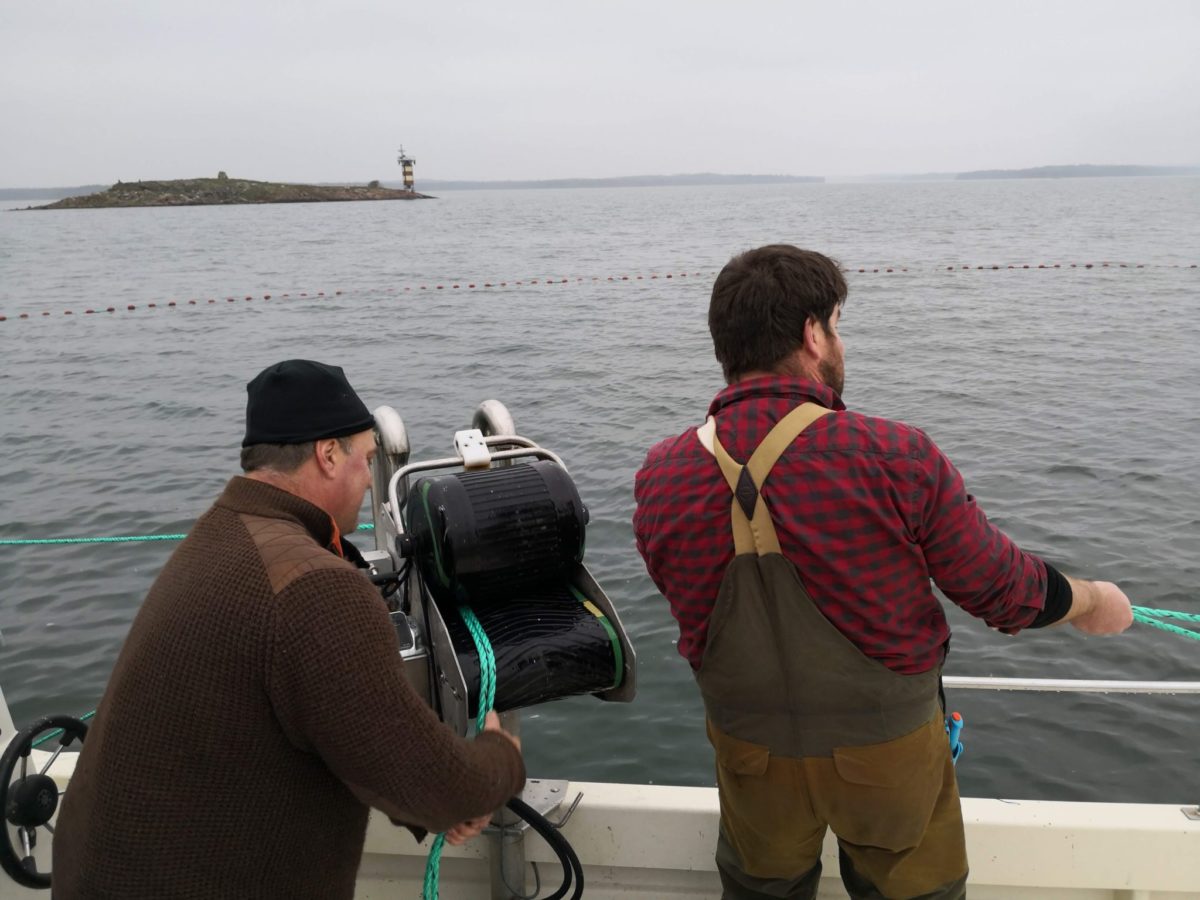 We continued to do more throws in a “trial-and-oops” fashion. For instance, one time we positioned the boat on the wrong side of the wind, resulting in the boat drifting over and on top of the net instead of away from it, which probably scared most of the fish away. Another time we threw the net inside-out which unfortunately didn’t work so well. At one point we felt brave enough to try and haul the net by hand instead of with the pulling machine. It was a nice workout for all three of us, but we concluded that we were quite lucky to have the pulling machine with us! By the time we did our 6th and last haul, we felt like we were getting a hang of it, but this time the largest part of the catch was comprised by such small individuals that most of them escaped through the net. 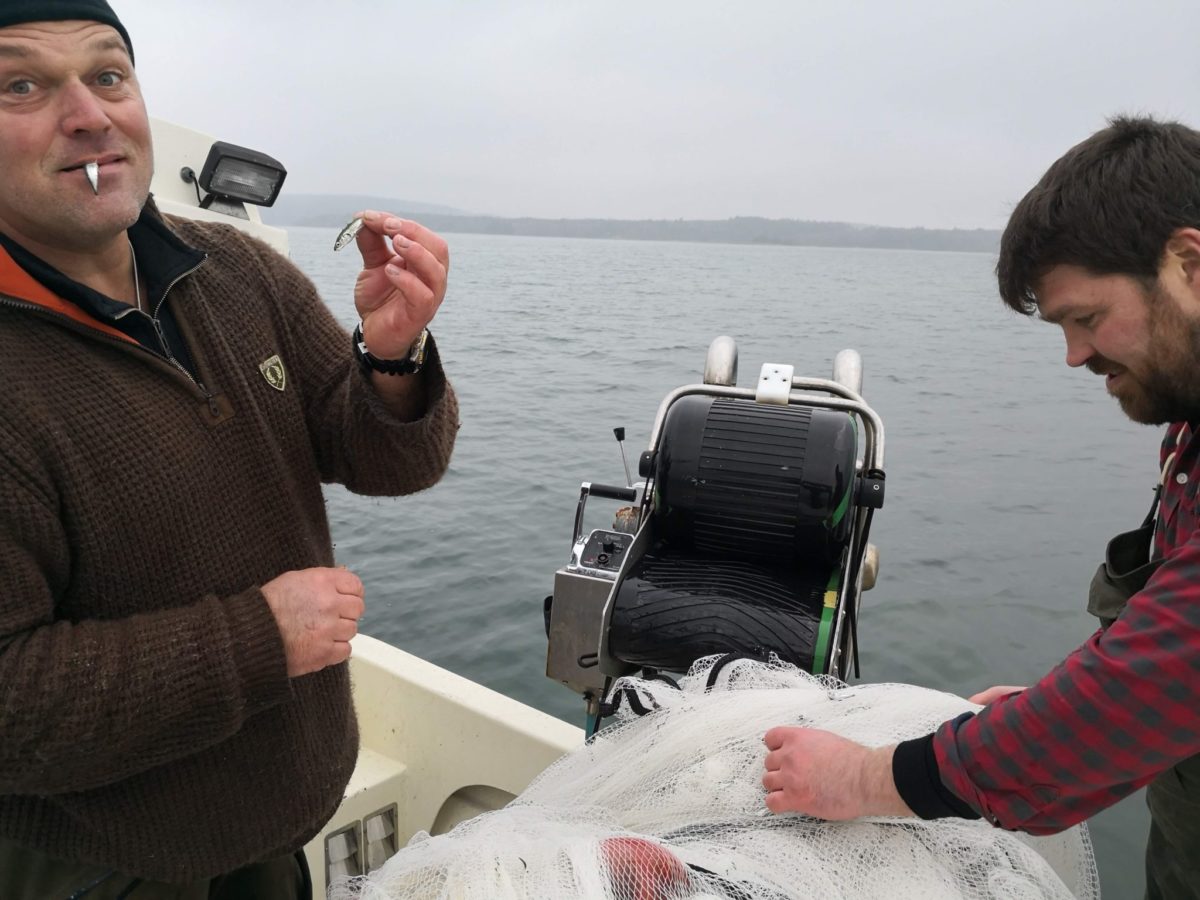 Next time, we will try the traditional way of fishing in the dark, using a light source to lure the stickleback up to the surface waters. We did see several large schools of fish on the sonar, but they were all deeper than what we could reach with the 10 m deep stickleback seine. Altogether this was a successful trip, as our main purpose was to learn about how to handle the equipment as well as observing the behavior of the fish. As a bonus, we got to enjoy a really nice day out at sea in a very beautiful and serene environment. There is a saying among researchers that goes “any day in the field is better than a good day in the office”. Well this was certainly true for this field day!