In one of the SEABASED pilots nutrient-rich bottom waters are removed from two eutrophied semi-closed, coastal bays and the possibility of recycling nutrients by utilizing the water for irrigation on fields is tested. Annica Brink, a project coordinator from The Government of Åland, reveals the first results from two irrigated fields.

In summer 2019, the fields near Kaldersfjärden and Ämnäsviken bays were irrigated with nutrient-rich brackish water. The set-up at Ämnäsviken was easy and straight forward. The farmer already had the necessary equipment, as he irrigated the field already in summer 2018 (prior to joining the SEABASED project). Ämnäsviken is shallow (max depth 2.9 m) and wind-mixed, so the water pipe inlet is placed at 0.5 m depth. At Kaldersfjärden, the farmer acquired the equipment by leasing, and the set-up procedure was much more elaborate compared to Ämnäsviken. As this bay is much deeper (6.3 m), we aimed at fixing the inlet at 3.5 m depth; to reach the more nutritious bottom water below the thermocline but at the same time avoiding loose sediments from entering the water pipe. 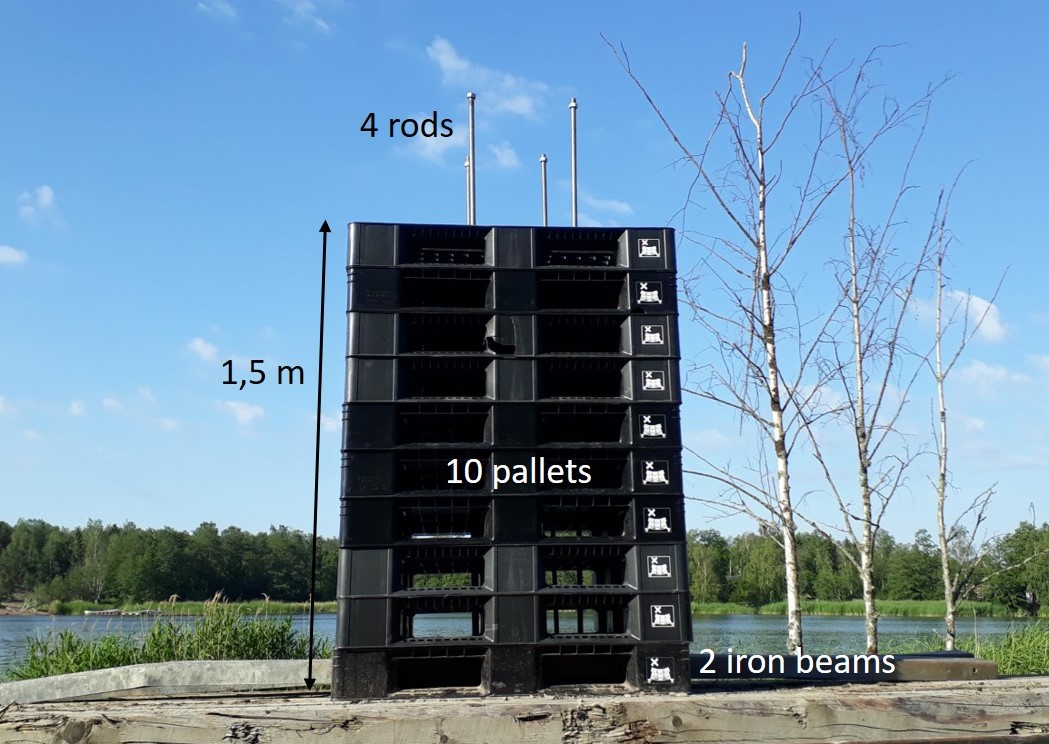 Kaldersfjärden equipment set-up, ensuring a water inlet depth of 3.5 m, 1.5 m from the bottom. The total depth at the inlet site is about 5 m. Picture: Annica Brink

The irrigation water from both bays was transported to the fields with the help of a tractor pump, and a conventional water cannon was used for irrigating the crops. The farmers decided the need for irrigation; the Kaldersfjärden field (2.7 ha) was consequently irrigated four times and the Ämnäsviken field (7.4 ha) two times. The amount of water was always 40 mm. The control sites next to the pilot sites were not irrigated but otherwise treated in the same manner, e.g. no fertilization (organic farming) at Kalderfjärden and artificial fertilization at Ämnäsviken. Both farmers grew ley (grass) on their fields with a similar composition of plant species. For every irrigation occasion, the farmers collected samples from the irrigation water and submitted them to a local accredited laboratory for analyses of nutrients, salt etc. The monitoring of the bays continued throughout the summer. 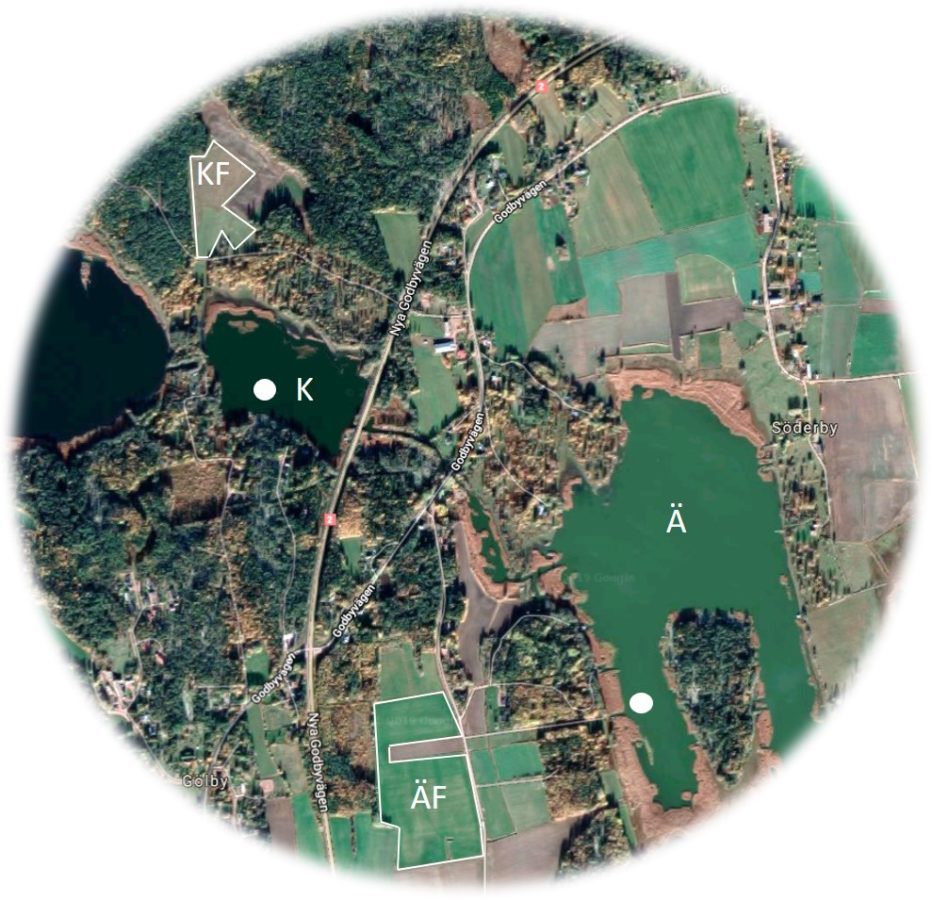 Ämnäsviken bay (Ä) and field (ÄF), Kaldersfjärden bay (K) and field (KF) as well as the site for water intake (white dots). A part of each field is treated as a control site.

How did it go?

The two farmers were happy with the outcome of the pilot activities after the first season. The production of ley increased 167% at the Kaldersfjärden field, and 67% at the Ämnäsviken field, compared to the respective control site (second harvest). That’s a lot! As can be seen in the picture below, there is a clear difference between irrigated and non-irrigated ley. According to one of the farmers, even the roe deers preferred the irrigated ley…. 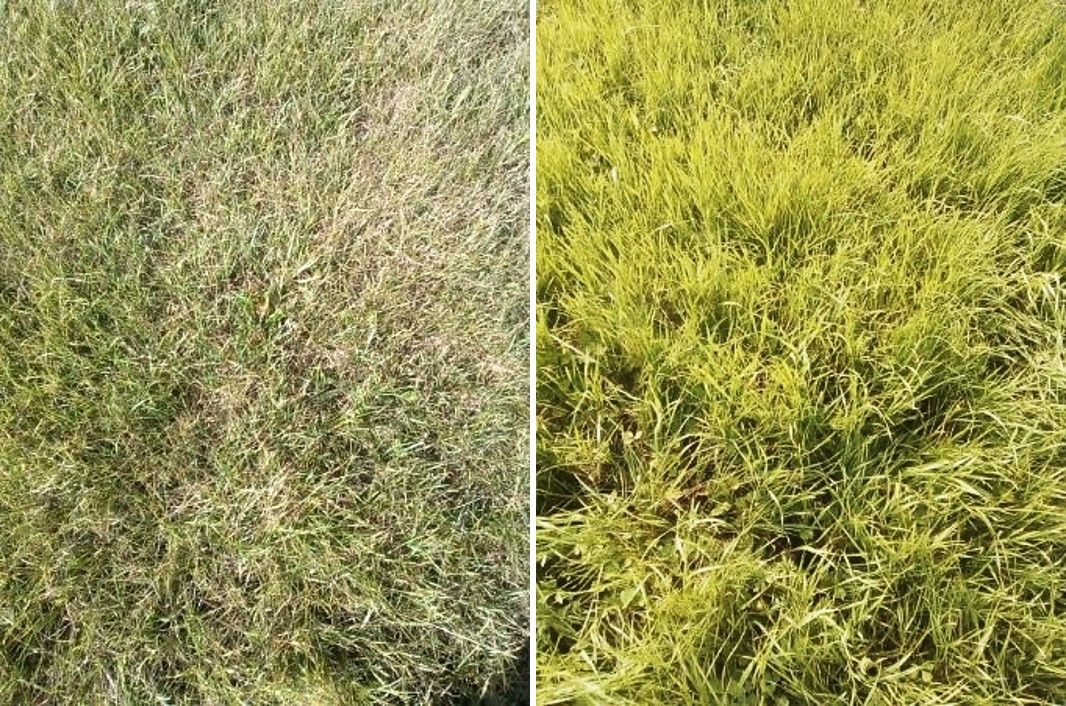 …but what about the salt?!?

The laboratory analyses of the silage indicate a slightly higher mineral content in the irrigated ley compared to the non-irrigated ley. For sodium (Na), however, the increase in the irrigated ley was twofold. This is not a surprise as most of the brackish water salt content is constituted by sodium chloride (NaCl). Over the whole season, sure enough, quite a lot of salt was added to the fields. For the field at Kaldersfjärden, the amount added up to 560 g/m2, and for the Ämnäsviken field, the number was 380 g/m2. Most of the salt is expected to leach out from the soil with the help of rainwater and snow, eventually making its way back to the bay. Next spring, we will sample the soil and compare the results with those obtained from soil samples collected in spring 2019. We also monitor the groundwater, as salt-contamination is a potential risk. The sampling made in October 2019, after some rainy weeks, showed no indication of an increase in salt concentration. 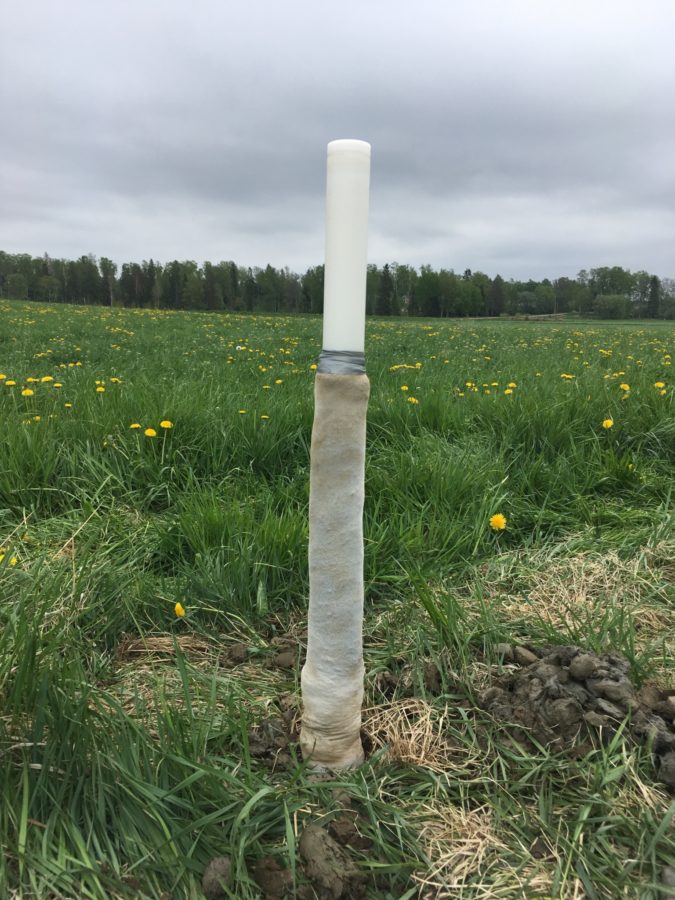 One of the groundwater tubes drilled into the Ämnäsviken field. The thick layer around the tube contains bentonite clay, acting as insulation between the soil and the tube near the soil surface, preventing rainwater from taking the fast-track down the tube. The sampled groundwater should be the water that has traveled through the soil. Picture: Annica Brink

In summer 2020, the fields will be irrigated for another season along with sampling of soil, irrigation water, groundwater, crops, and continued monitoring of the bays. So, what will happen with the salt? Will we see an effect on the soil or groundwater? Will the roe deers bring their relatives to feast on the juicy ley?