A field trial of a newly developed phosphorus sorbent is ongoing in Djuröfladen, a small semi-enclosed bay in the Stockholm archipelago (Värmdö municipality). The pilot trials are led by Stockholm University and its contractors. Environmental consultant Nils Ekeroth describes the details of the on-going trial.

The phosphorus sorbent used in the pilot is a heat-treated, calcium rich material, commonly known as marl, originating from the Island of Gotland in the Baltic Sea proper. This activated marl was designed to act as a “trap” for inorganic phosphorus. The idea is that the high release rate of phosphorus from marine sediments during oxygen depleted conditions may be lowered by supplying a small amount of the sorbent to the sediment surface. Currently, the high release rate of phosphorus from oxygen depleted soft sediments in the Baltic Sea worsens eutrophication.

Djuröfladen Bay was selected as a very favorable pilot site for several reasons. It is easily accessible, sheltered and the soft bottom sediment in its central part is flat and rich in organic matter. Severely oxygen depleted conditions occur in the bay each year, which in turn make the bottom sediment a very poor sink for phosphorus. The idea with the field trial is to test whether the binding capacity of phosphorus in the upper layer of bottom sediment may be increased by a thin layer of added sorbent.

First trials of spreading sorbent by hand are monitored closely 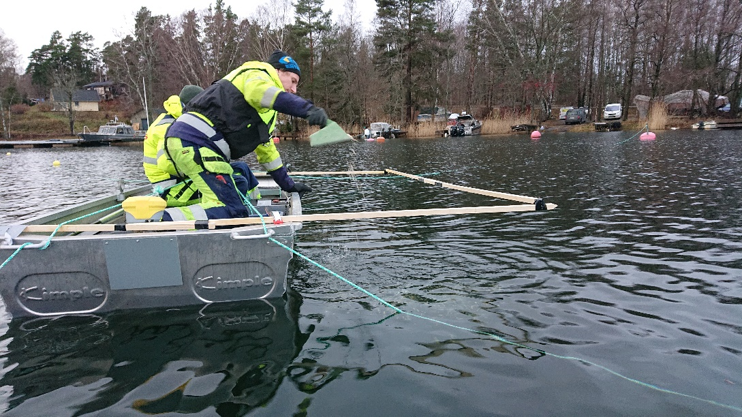 Spreading the sorbent by hand in Djuröfladen.

The spreading of the sorbent was conducted from a small boat, equipped with a very high precision GPS-device in December 2019. Due to the exact positioning of the boat (mm precision), a small 18 x 18 m square plot area was treated with the sorbent (400 g sorbent/m2), while the rest of the seafloor remained untreated. 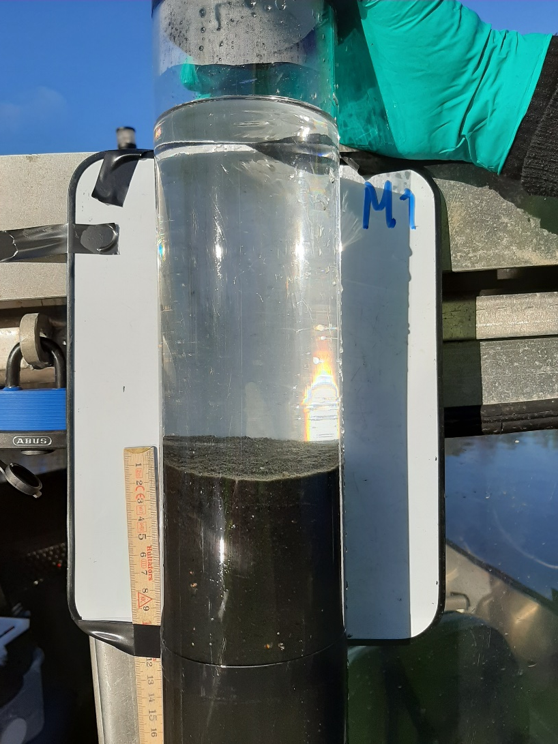 Sediment core from the plot which was treated with the sorbent.

About two months later, in February 2020, Djuröfladen was revisited and sediment samples were collected both from within and outside of the treated plot. The sediment sampling was done with great care as the soft bottom strata might otherwise be easily disturbed. The sediment sampler used has been developed specifically for collecting undisturbed soft sediment cores and it was also fitted with an underwater video system to allow for detailed quality control of the sampling procedure.

Sediment and pore water samples are currently being analyzed for phosphorus, calcium and a number of other elements. We look forward to evaluating the results in the near future. Meanwhile, preparations are ongoing for a follow-up trial in Farstaviken which is also located in the Stockholm archipelago. Here we hope to conduct a spreading of the sorbent on a somewhat larger scale but this is still under consideration by the permitting authorities.