The SEABASED project’s activated limestone pilot was lifted up by the Swedish Kungliga Ingenjörsvetenskapsakademien (IVA) as one of the top 100 research initiatives that have business potential.

– With IVA’s 100 list, we want to shed light on the need for researchers and companies to find each other and collaborate on the societal challenges we face. By building bridges between academia and business, we provide research with the potential to change the world, greater opportunity to translate into actual benefit and increased Swedish competitiveness, says Tuula Teeri, CEO of IVA.

With the activated limestone method, we wish to reduce the phosphorus content in the coastal bays of the Baltic Sea. This innovation created by Stockholm University researchers has approximately 500 times higher phosphorus uptake compared to untreated limestone according to previous studies. The material spreads on the water surface, then it sinks down to the bottom sediment to bind phosphorus and reduce emissions. The activated limestone pilot team seeks collaboration with companies in Sweden within the lime industry and within clean-tech to produce, sell and internationally distribute this unique method. Read more about the marl pilot and the pilot activities started in the Stockholm archipelago area.

The SEABASED Project (Seabased Measures in Baltic Sea Nutrient Management) assesses measures that improve the status of marine area by reducing the internal load of the sea. The project pilots selected measures in the pilot areas in Finland, Åland and Sweden. The project is led by the John Nurminen Foundation, and the project partners are the Centre for Economic Development, Transport and the Environment for Southwest Finland, Government of Åland, the Åland Fishfarmers’ Association, Stockholm University and County Administrative Board of Östergötland. The total budget for the project is approximately 2.8 million euros of which the EU Interreg Central Baltic programme is financing approximately 2.1 million euros. 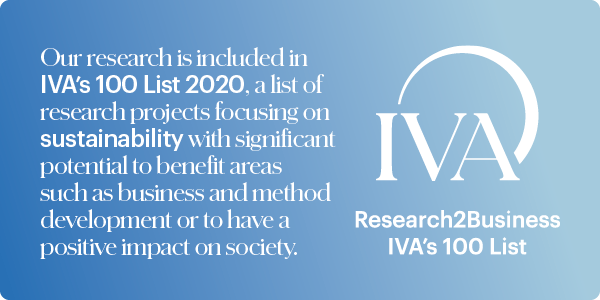 More information about the top 100 list can be found on IVA’s homepage.