The SEABASED Steering Group and project team gathered in Mariehamn, Åland 24.–25.4.2019 to catch up with the pilots and to collect views and valuable advice.

Two steps forward in some pilots, one step backwards in others

The SEABASED Steering Group was eager to hear how the different pilots and workpackages are proceeding. Most pilots are proceeding nicely, the ground work is now done, all that is left is to finalize land-owner agreements and prepare for field work. The artificial reefs in Östergötland will be constructed in May. The irrigation with nutrient rich waters -pilot has now two eligible pilot sites and monitoring has been tendered. The first stickleback fishing trial has been done last autumn and the trials will continue during this spring and summer. The sampling of the sediment removal sites has been tendered and will be launched soon. The laboratory tests for the sediment binding pilot show encouraging results and the pilot is now in permitting phase. A lot of progress has been made.

As it happens, life hardly ever goes as planned. Applying for permits sounds very easy, but one might get stuck in the rabbit hole of bureaucracy for long periods of time before the permits are granted. The permit processes also vary in Åland, mainland Finland and Sweden. Luckily we still have time to sort out the permits and other possible obstacles looming around the corner. The key is to document everything, even the obstacles. That way we will have a more comprehensive base for the guidelines and for accessing the suitability of each pilot for future use. As one of the project team members said it might look like we are doing nothing, but the results will be seen later. It is interesting and thrilling to work with something unknown. The Steering Group gave us valuable and encouraging feedback, we are on the right path!

What would a farmer or a scientist think about the Water Improvement Fund? 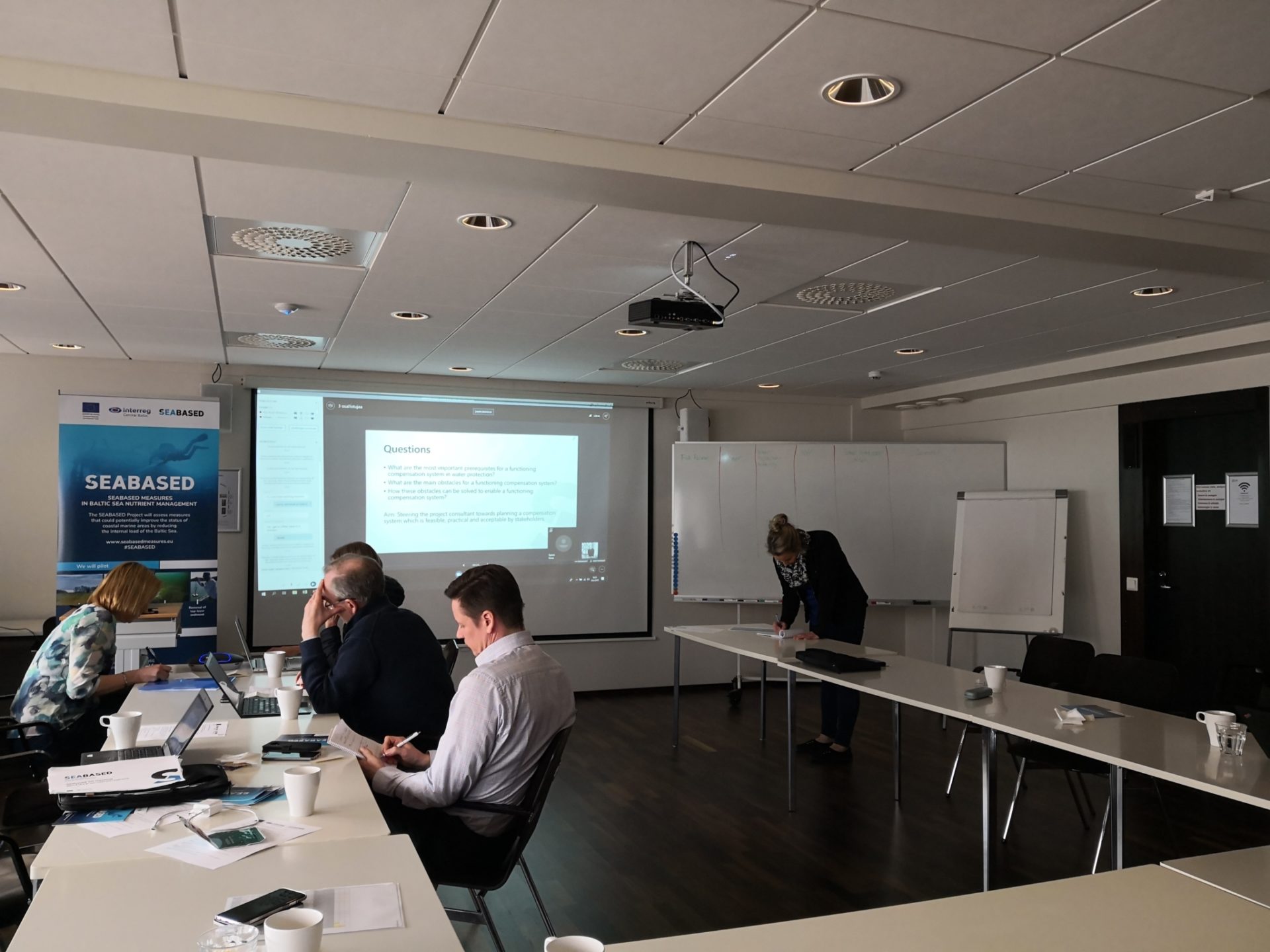 Steering Group is having a workshop in form of role play.

There are many viewpoints that should be taken into account when building a concept for the Water Improvement Fund. In these early stages we decided it is necessary to think outside of the box for a while and collect valuable information from the experts in our Steering Group. What would a farmer say about compensating nutrient leakage? How to convince a scientist or an NGO that this model will make the state of the Baltic Sea better and not “less worse”? What is the incentive to compensate and what kind of methods would be applicable? What happens if the compensation method fails, who is to blame? We had a really good discussion over these topics and although many of these questions are left unanswered, they serve as a good base for the consultants, who are starting the development work for the Water Improvement Fund.

The next day we heard more about upcoming changes in the legislation in Åland presented by Mikael Wennström from the Government of Åland. The aim of the new Water Act is to have more detailed and binding legislature that takes sustainable development into account. The legislation might include a possibility for voluntary water improvement actions which aim to create improvement surplus. There are still some unresolved issues like the burden of proof of the nutrient load and the effectiveness of the chosen method of compensation, among other things. We will be closely watching the development of the new Water Act. It remains to be seen if changes will be made in the legislation in mainland Finland as well. 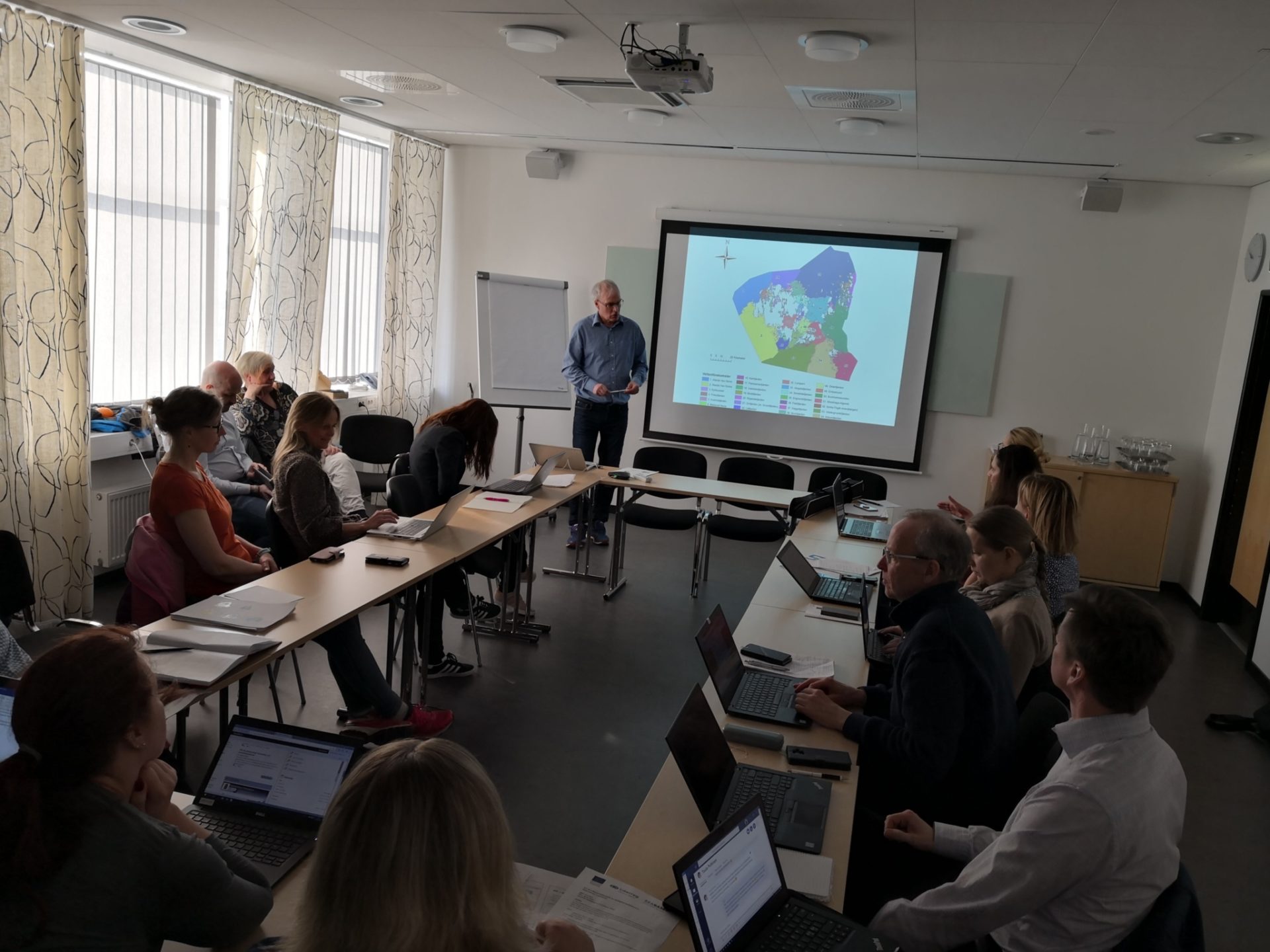 Mikael Wennström is presenting the upcoming Water Act in Åland.

During the afternoon we also heard more about the environmental legislature from Sara Kymenvaara, a layer and a member of the SYKE (Finnish Environment Institute) consultant team that will build the concept for the Water Improvement Fund in our project. We also heard about the ECOCOA project that was presented by Lena Bergström from the Swedish University of Agricultural Sciences. We learned that it is important to make the environmental values visible for decision makers and authorities. It is hard to protect and nurture the sea if one does not know its worth. Also, it is not easy to compare the value of different habitats and species. Does an endangered species value more than a common one?

In the end we had good discussions on what the Water Improvement Fund should focus on. We agreed that nutrient reductions should be the main focus and that we are aiming to make a viable concept, that works in practice, not just a theoretical model.

The two day gathering was a good reminder for us all that it is important to stop every now and then, reassess what you are doing, make improvements if needed, and then continue on with your work. This will lead to even better results in the end.