The EU funded SEABASED project’s pilot moved from laboratory tests to practice, as a new marine restoration method, the spreading of activated limestone by, was tested in an enclosed sea bay in Rymättylä on Thursday 11th June.

Media and project team representatives, as well as local inhabitants, had gathered to ponder whether the severely eutrophicated sea bay could be saved by using limestone. We waited eagerly on a local cottage owner’s dock for the helicopter to approach and spread the pre-treated limestone over a deep-water area in front of us. It did not take long before grains of limestone were pattering on the water before sinking to the bottom of the sea. 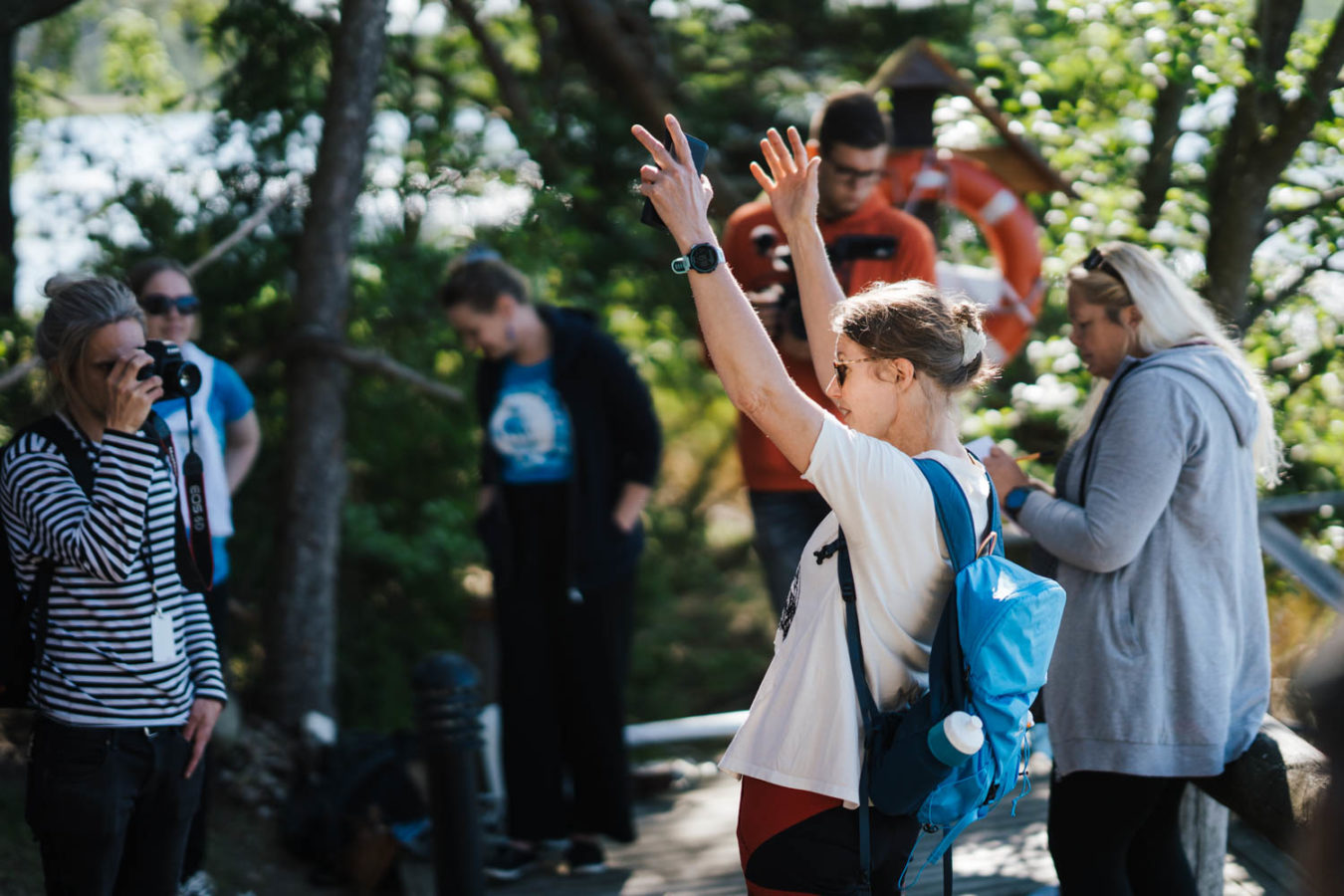 Reporters and project representatives were eagerly waiting for the start of the spreading of limestone by helicopter. Photo: Tara Jaakkola / John Nurminen Foundation

The new method aims at binding phosphorus permanently into the bottom sediment with limestone. The restoration method was developed at the University of Stockholm, and it has previously been tested outside the coast of Linköping in Sweden. The limestone pilot in Rymättylä is co-funded by the EU Interreg Central Baltic programme and the corporate supporters and private donors of the John Nurminen Foundation. The limestone used in the pilot was donated from Nordkalk’s quarry in Gotland. 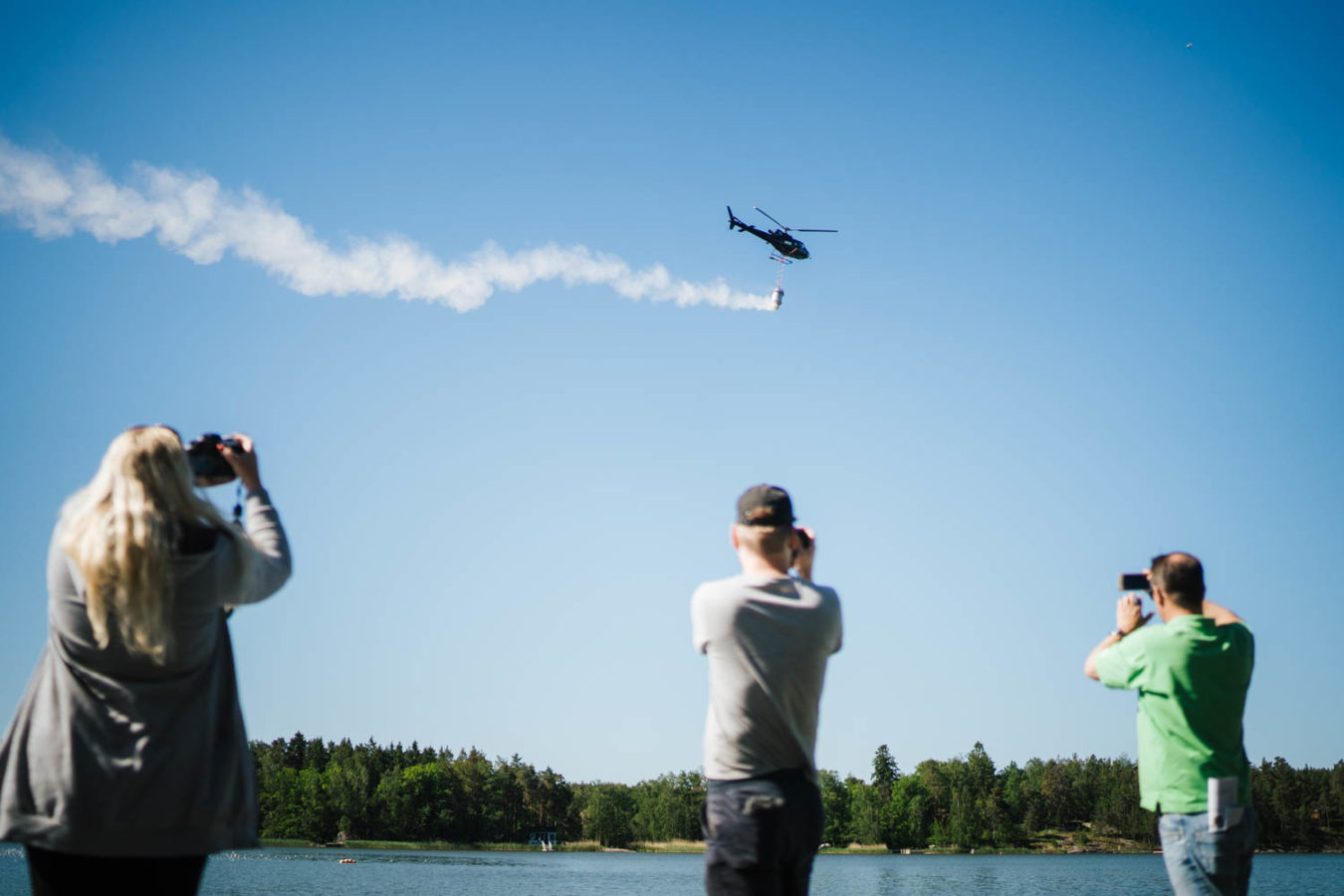 8 000 kilos of treated limestone was spread to the Kolkka Bay area in Rymättylä. The goal is to bind phoshorus permanently to the seabed. Photo: Tara Jaakkola / John Nurminen Foundation

The method was now tested for the first time in Finland, and it came off very well. “It was great to see a method that had taken a long time to develop in the laboratory being finally, after thorough preparations, tested in a real-life setting in Finland, as well. After application, the effects at the pilot site will be followed closely, and it will be exciting to see if the method works according to expectations and with equally good results even in natural conditions,” Project Manager Miina Mäki comments with enthusiasm.

Kolkanlahti is an almost fully enclosed bay suffering from a high nutrient load, which makes it a good pilot site. A preliminary monitoring was carried out by the Centre for Economic Development, Transport and the Environment for Southwest Finland, showing low oxygen levels in the bay. Even though the wind mixes the water, the water in the bay is hypoxic and turns anoxic at 5-meter depth. With such high levels of internal nutrient load, reducing nutrient flows from land alone will not be enough to stop the eutrophication, and therefore new innovative methods are needed. The local inhabitants of Rymättylä have given a lot of positive feedback and are waiting eagerly for the results. Afterall, restoring the eutrophicated sea bay would mean very good news for swimmers, anglers and fishermen, locals as well as holiday residents.

Internal nutrient load slows down the recovery of the sea

While we have been successful in cutting the nutrient load from land to sea during the past few decades, old nutrients from land, stored in the seabed, are slowing down the recovery of the Baltic Sea through what is called internal nutrient load. Especially in anoxic conditions, sediment-bound phosphorus is released back into the water to feed algae. This leads to eutrophication, which manifests as, e.g., excessive cyanobacterial blooms in the summer. When algal growth accelerates, increased amounts of dead algal mass sink down to the bottom. The breakdown of dead organic matter consumes oxygen, increasing hypoxia at the seafloor, which, in turn, promotes the release of even greater amounts of phosphorus to be utilised by algae.

”The foundation has worked for 15 years to reduce nutrient flows from land to the Baltic Sea, and this work will continue. Reducing internal nutrient load is, however, central for the recovery of the sea, which is why the foundation wants to investigate possibilities for achieving further reduction by innovative measures, such as the application of Gotland limestone. These measures may bring new hope especially for severely affected, enclosed sea bays like Kolkanlahti,” says Marjukka Porvari, Director of the Clean Baltic Sea projects.

The Director of John Nurminen Foundation’s Clean Baltic Sea projects Marjukka Porvari (on the left) emphasises, that the foundation continues its work with reducing nutrient leakages from land. On the right, planner Irma Puttonen from the Centre for Economic Development, Transport and the Environment for Southwest Finland. Photo: Tara Jaakkola / John Nurminen Foundation

The SEABASED Project aims at assessing and finding means to reduce internal nutrient load in enclosed sea bays in the Baltic Sea area by decreasing the amount of phosphorus already accumulated in the sea. It is, however, essential to remember that reducing the internal load of the sea can only have effective impact if at the same time nutrient flows from land to sea are heavily reduced.

The limestone application pilot in Sweden has yielded promising preliminary results in the reduction of phosphorus levels, but measurements from a longer time period will be needed to assess the durability of effects and the efficacy of the method. The Kolkanlahti pilot site will also be monitored actively, and the first results regarding the efficacy of the method will be available towards the end of 2020. The results from the experiment will be included in a guideline document for authorities and policymakers concerning the preconditions for and applicability of measures to control internal nutrient load in diverse environments in the Baltic Sea. The guidelines will also assess the cost-effectiveness of the measures, to give a thorough view of the feasibility of the sea-based measures in marine protection. 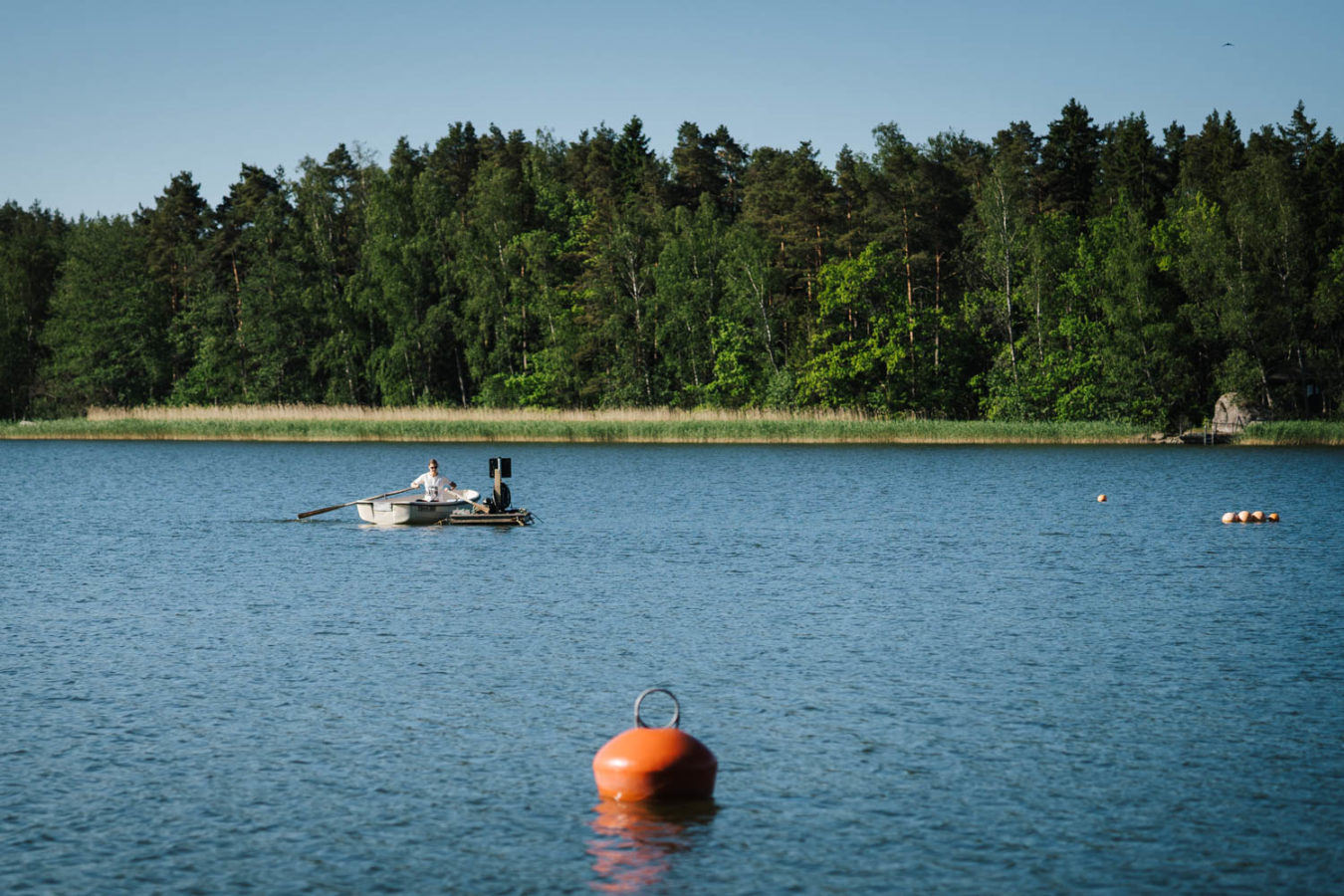 The Centre for Economic Development, Transport and the Environment for Southwest Finland monitors the site and its developement throughout the summer until late autumn. Planner Irma Puttonen is rowing around the measuring equipment. Photo: Tara Jaakkola / John Nurminen Foundation

The SEABASED project is led by the John Nurminen Foundation, and the project partners are the Centre for Economic Development, Transport and the Environment for Southwest Finland, Government of Åland, the Åland Fishfarmers’ Association, Stockholm University and County Administrative Board of Östergötland. The project is funded by the EU Interreg Central Baltic programme. To learn more about the pilot experiments and subscribe to the project newsletter, which will keep you informed of the project’s progress, please visit the project’s website: seabasedmeasures.eu