In the end of March, the Government of Åland and the County Administrative Board of Östergötland headed for Västervik, Sweden, or more specifically, Gamleby. Besides being the second largest urban area in Västervik Municipality, Gamleby is also the location for an exciting project. Annica Brink, a project coordinator in the Government of Åland, writes how brackish waters have been used to irrigate agricultural fields in Sweden.

Nearly half of the Västervik surface consists of water with 500 lakes and 550 km of coastline. For many years, the municipality’s coastal waters have been suffering from eutrophication. Gamleby Bay is one of the most severely affected sites. Several land-based measures have been taken to counteract the high nutrient levels in the bay. To further, and faster, improve the status of the bay, the nutrient-rich and oxygen-depleted water near the bottom of Lake Dynestad was pumped up and used as a nutrient source for crops in 2014. Since then, the project has evolved and in 2018 fields with a total area of 50 hectares were irrigated with the brackish lake water. 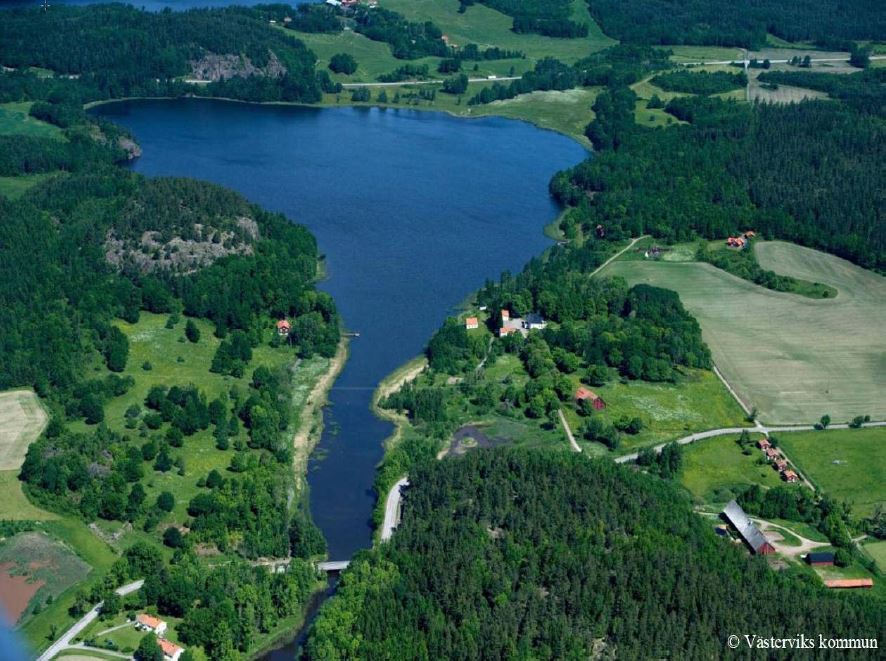 The SEABASED project met up with Dennis Wiström, front figure of the Västervik project, to learn more about this interesting experiment. Also Anders Fröberg, environmental administrator at Västervik Municipality, and a local farmer Gabriel Jonsson, one of the owners of Ogestad Egendom, were sharing their experiences with us. With 1700 cows and 1400 hectares of farmland, Ogestad Egendom is one of the largest milk producers in Sweden. For five years they have irrigated some of their fields with brackish water from Lake Dynestad. His experience is that it works well, the crops (ley, cereal, field beans) have increased their production compared to crops grown on non-irrigated fields, and they have not seen any adverse effects on the soil structure.

Dennis Wiström explained that since the irrigation project started, the oxygenated water column in the lake has increased by one meter. The pump capacity is 48 m3/h which translates into 1 kg nitrogen and 0,1 kg phosphorus being removed from the lake for each hour of irrigation. The brackish water has a salinity of around 4‰ and has been well tolerated by the crops. For example, the production of ley from the pilot site has increased with 20%, compared to ley from non-irrigated fields.

Hoping for promising results in the SEABASED pilot

After our meeting, we are even more excited about the pilot activities in the SEABASED project. In Åland, our pilot bays are not as eutrophicated as the Dynestad Bay. Nevertheless, they have bad ecological status according to the Water Framework Directive, so there is certainly room for improvement. The salinity of the water in Kaldersfjärden and Ämnäsviken is about the same as the salinity in Lake Dynestad, fluctuating throughout the year. The two fields included in our pilot are much smaller compared to the fields of Ogestad Egendom, but if we obtain as successful results as they did in Västervik, this sea-based measure shows great promise for future large-scale applications. Let’s turn the eutrophication problem into a resource and put the nutrients on the fields!